Oracle Precision has proudly become the main sponsor for the Chapeltown Athletic Junior Football Club (JFC) Under 9’s team. Our logo is now emblazoned on their kits for home and away games to show our support.

From 5 Axis to 5-a-Side: The Team We Sponsor

Chapeltown Athletic JFC was established in 1984 and gained Charter Standard in 2003. The club has teams starting from under 8’s all the way up to under 16’s, giving lots of children from the local area plenty of chances to play at the Ecclesfield School football pitch and take part in matches.

Chapeltown Athletic JFC’s motto is ‘Football is Fun’ and the team organisers make sure this remains true for every child of any ability level who wants to take part. Every player gets at least 10 half games per season. Nobody gets consigned to the bench at this club!

There are also no trials for kids to play for Chapeltown Athletic JFC, as the team is truly committed to welcoming children of all abilities. This is surprisingly rare for junior football clubs, so Chapeltown Athletic JFC makes for a great exception. The team has even caught the attention of local Sheffield newspaper The Star for their inclusive and friendly ethos. 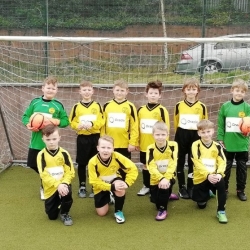