Oliver Brown, 21 from Derbyshire started as a 10 year old in adult snooker league in Sheffield.  He quickly progressed in the game and at 12 years old was the youngest player to be sponsored by Pontins Holiday Camp, the venue for many of the major snooker competitions.

Oliver has been coached from an early age by Nigel Bond and in 2012 Oliver beat Nigel in the world snooker international championship 6-4 to travel to Yixing in China, following this Oliver was invited to every main tour event of 2013/14 as world number 1 amateur in 2014 he beat such names as Andrew Norman, Gary Wilson, Dave Harrold, and good friend and practice partner Ding Junhui to earn a place in the Wuxi classic in China.

Shaun Palmer, Director said "We are proud to have supported Oliver in his trip to compete in the Wuxi Classic and wish him the best of luck in his future career."

Oliver trains at the Star Snooker Academy in Sheffield with many top professionals with the aim of taking his place on the main tour in the next 2 years. 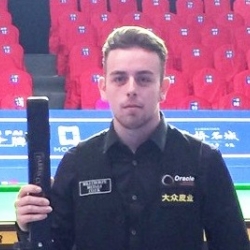